For the longest time, marijuana was an under-the-table commodity. It was talked about in hushed tones and exchanged discreetly so as to avoid detection. During those dark days, weed prices were largely dependent on the whims of the person doing the selling. There was no online infographic explaining what does weed cost. You paid what he asked because you didn’t know where else to go.

Thankfully, those days are gone forever and the market has completely changed. Not too far in the future, we’re likely to see a major company that grows or sells marijuana traded on the stock market. Ganja is now discussed openly by everyone from big name financiers to the average joe on the internet. In some states you can even walk into a corner store and purchase a bit of wacky tabacky for the weekend…legally.

That’s all well and good, but the age-old question still remains: How do you know if you’re paying too much for a date with Mary Jane? In the article below, we’ll compare weed prices across the country so you know what the going rate is in your area. We’ll also give you some insight into what affects the price of weed.

In the sections below, we’ll give you an average price range and then show you the cost for that quantity in Denver, Colorado; Seattle, Washington; Los Angeles, California; Dallas, Texas; and Miami, Florida. Also, keep in mind that the prices listed here are for medium quality weed. High-quality weed will cost more.

Gram: Price Per Gram Of Weed

The gram is the base unit for measuring marijuana. Technically speaking, it’s a metric unit of mass equal to one thousandth of a kilogram. As you’ll see as we go along, the various ounce measurements are based on grams so it’s useful to know the price for this small quantity.

Another great way to gauge these common quantities is by how many joints they yield. This is by no means an exact science but your average joint weighs in at 0.7 grams of marijuana. Basically then, a gram gives you 1.5 joints. Again, this a very rough estimate.

Eighth: Price Per Eight Of Weed

An eighth (of an ounce) is equal to 3.5 grams. With our bottle cap comparison, an eighth of an ounce of weed is roughly equivalent to three bottle caps. An eighth will produce about five joints if rolled sparingly.

Quarter: Price Per Quarter Of Weed

A quarter (of an ounce) is equal to 7 grams. On the visual scale that’s about seven bottle caps. Remember, it’s not an exact visual representation. It is, however, a good approximation you can use to guesstimate the amount of weed you’re getting.

A quarter of an ounce of MJ will produce about 10 joints rolled with 0.7 grams each.

Half: Price Per Half Of Weed

A half (of an ounce) is equal to 14 grams. You’ve probably figured out the math by now, but just in case: a half an ounce of marijuana would likely yield twenty joints

Ounce: Price Per Ounce Of Weed

An ounce is equal to 28 grams. A pile that weighs in at an ounce will be about as large as twenty-eight bottle caps. This quantity of marijuana can produce about forty joints. 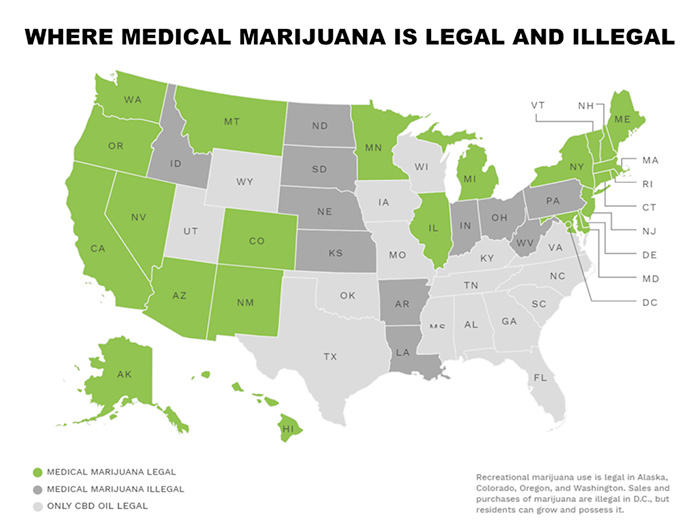 Where you live is probably the biggest factor affecting weed prices. And it’s not just geography. It’s your state’s stand on legalization. In most places, dealers can go to jail for selling. Their prices are often going to be higher in reflection of this risk.

The nice thing is that five more states (Arizona, California, Maine, Massachusetts, and Nevada) will be considering the question of legalization come November 2016. Should these initiatives pass, it will be much easier for residents there, and in surrounding states, to purchase the green they need.

Price And Where You Buy Weed

Again, depending on where you live, you have two options: buying from an individual “on the street” or buying from a registered dispensary or storefront. Where you buy has a major effect on weed prices.

In states where the sale of marijuana is legal, registered dispensaries and storefronts are typically cheaper than individuals selling on the street.

Depending on where you buy, competition may be another influential factor on the price of weed. If there are multiple individuals or multiple dispensaries selling in the same area, their competition for your business may cause them to lower their prices. If no competition exists, dealers can charge more for their product because it is a relatively scarce commodity.

In states where marijuana is legal, the sale of the weed is always associated with a tax or fee of some sort. Colorado, for example, includes a 15% tax on every pound to the wholesaler and an additional 10-15% to the end user. Washington levies a 25% tax on end users while Oregon taxes the producer/grower $35 per ounce.

How much of a tax is charged at any point in the supply chain can have a dramatic effect on the price you, as the end user, pay for your fix.

Quality is another major variable that affects weed prices. High-quality ganja is obviously going to cost more than medium- or low-quality stuff. We’re all familiar with this when it comes to gas for our car:  premium-grade gasoline costs more than regular unleaded.

You may not have much control over the quality of the weed being sold in your area, but when prices fluctuate from one week to the next for the same type and quantity, quality may have a lot to do with it.

Cannabis that is grown outside is usually ready for harvest by September. In the weeks and months following a successful harvest, prices may decrease as the supply available increases. Another reason for the price decrease is that cannabis grown outdoors is much less expensive to grow. Indoor-grown cannabis requires special lights, climate control, watering, feeding, and the electricity that makes it all possible.

Putting It All Together

Though amounts may vary widely from state to state, and even city to city, weed prices are beginning to approach some semblance of fair-market value. As more and more states legalize recreational marijuana, more and more storefronts will appear to sell it. As the marijuana industry continues to grow, prices will eventually become fairly consistent across the country. You’ll never pay the same everywhere you go, but prices will be fairly consistent throughout the country. When that time arrives, you’ll be able to know for sure, wherever you are, whether you’re getting a good deal on the weed you need.