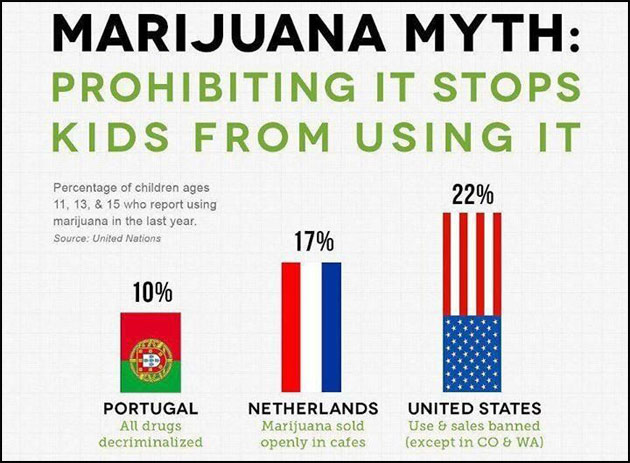 Myth: Marijuana kills brain cells
Fact: A study released in 2015 by the Journal of Neuroscience debunked a previous study that claimed regular marijuana use causes abnormalities in the brains of adolescents and adults. According to the researchers, they were unable to replicate that study, which was published in April 2014 by Northwestern University.

Myth: Marijuana is a “gateway drug” that leads to use of more dangerous illegal substances
Fact:The Institute of Medicine found that, while many users of drugs like heroin or cocaine do use marijuana prior to trying the harder drugs, there does not appear to be a causal link. Instead, marijuana is a typical precursor to heavier drug use because it is the most widely used illegal drug.

IOM researchers also state that marijuana is rarely the first “gateway drug” in the chain of events that leads to heavy drug use. That title goes instead to underage smoking and alcohol use.

Research has also shown that, while users can become physically dependent on marijuana, the symptoms of withdrawal are much milder. While marijuana users who stop smoking may suffer irritability and a slightly elevated heart rate, those who are withdrawing alcohol, opiates or benzodiazepines could suffer everything from elevated heart rate and blood pressure to hallucinations, seizures and even death.

Myth: Marijuana causes more damage to a person’s lungs than cigarettes
Fact:Researchers with the University of California San Francisco and the University of Alabama at Birmingham found that, while long-term, heavy marijuana use could take a toll on a person’s lungs, the air-flow rate of a person’s breathing actually increases with increased exposure to marijuana – up to a certain level. The reason, the researchers said, is likely due to the difference in the number of joints marijuana smokers consume versus the number of cigarettes a typical smoker consumes on a daily basis.

Myth: Marijuana cures anxiety in people
Fact: While this myth might actually hold some truth for some people, research has found that marijuana has the opposite effect on the majority of users. A 2014 study authored by a Vanderbilt University professor found cannabinoid receptors in a part of the brain that regulates anxiety and a person’s flight-or-fight response.
The study found that, while marijuana’s cannabinoids can reduce anxiety, chronic use “down-regulates” those receptors and paradoxically increases anxiety

Myth: You can overdose on marijuana
Fact: Don’t believe everything you read on Facebook. Remember those cannabinoid receptors? According to the National Cancer Institute, those receptors – unlike a person’s opioid receptors – are not located on the body’s brain stem that controls respiration.

In other words, while taking too many painkillers can slow a person’s respiration so much that they die, that cannot happen with marijuana.

Myth: The munchies are not real
Fact: Though one argument against marijuana use for malnourished cancer patients is that the “munchies” are a figment of the imagination, science has proven that argument wrong. Smithsonian Magazine reported in 2014 that research has shown that THC fits into the receptors in the brain’s olfactory bulb, a neural structure involved in the sense of smell.
What that means for pot smokers is that marijuana significantly increases their sense of smell and taste, which leads them to eat more food after smoking.